The Jack of Hearts Band 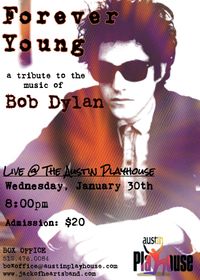 Forever Young - A Tribute to the music of Bob Dylan -- Live in Austin, TX

Jamie Daniels performs as Bob Dylan with stunning accuracy, authentically replicating his unique sound -- from the early 60's folk scene in Greenwich Village to the radical electric conversion culminating in Blonde on Blonde, the Woodstock retreat, and through the 70's to masterpieces such as Blood on the Tracks, the Rolling Thunder Revue and beyond.

Featuring a solo acoustic set as well as a band set.

This is a show you won’t want to miss!